The article is by Janine Mendes-Franco 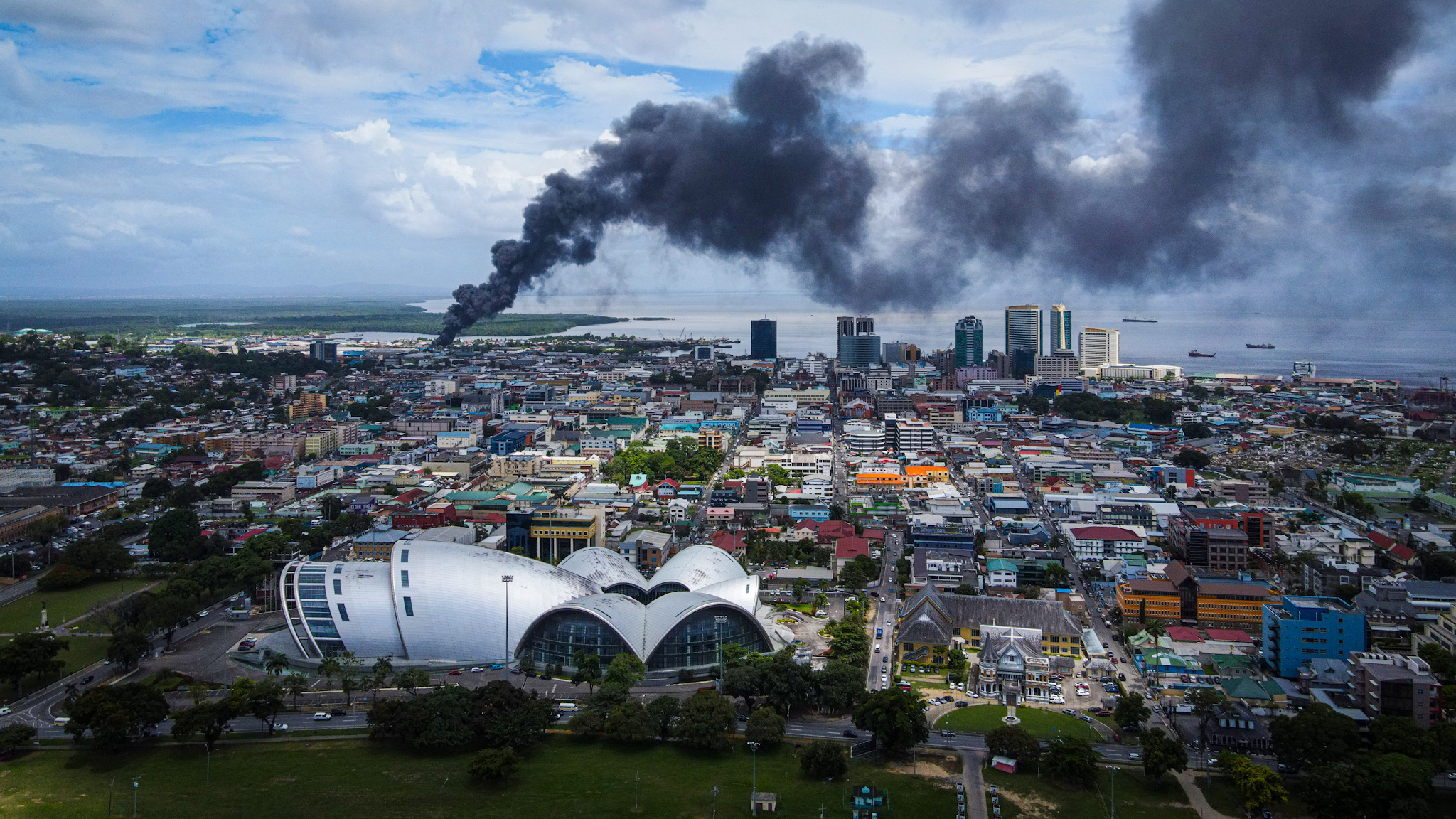 Drone shot of Port of Spain, Trinidad, during July 4 protests over the July 2 police killing of three young men. Image by Gabriel Nagee, used with permission.

Trinidad’s capital city, Port of Spain, was in gridlock on July 4 as a result of protests about the police killing of three young men over the weekend.

According to local media reports, six men from various parts of Laventille, a disenfranchised community on the outskirts of the capital, were driving home from a party at around 3:20 a.m. local time (UTC-4). Police claim the occupants of the car shot at them and they returned fire, killing three: Fabian Richards (22 years old), Niko Williams (21) and Isaiah Roberts (17). A fourth man was shot and taken to hospital, while the other two escaped.

Roberts’ grandmother was completely distraught, accusing the police of killing Black people’s children “on the road like dogs.” Upon learning of the death of his son, Richards’ father raised the question of profiling and police abuse, telling the Trinidad Guardian newspaper: “This triggers me to ask if the system really [is] for us or not […]? Six ni…s in a car, six ni…s is criminal? Because they living in Laventille? Because they driving a [Nissan] Tiida?” Richards’ mother said they plan to go to the Police Complaints Authority (PCA) over the killing.

The PCA, an independent body charged with investigating police corruption and misconduct, recently found that Constable Clarence Gilkes, who was fatally shot on April 22 — an incident his fellow officers had blamed on a member of the “hotspot” Richplain community who they were pursuing and launched a manhunt to find the man responsible — was actually accidentally killed by one of his colleagues.

It is not the first time that the Trinidad and Tobago Police Service (TTPS) has been accused of abusing its power. On June 27, 2020, after a police officer was shot dead in Morvant, a depressed area east of Port of Spain, some of his colleagues went into the area and killed three men. Protests over the killings soon followed, stirring conversations about the many ways in which vulnerable communities are alienated and their experiences dismissed. A few months after that incident, PCA director David West confirmed that a preliminary investigation had been completed and a report sent to the country’s Director of Public Prosecutions (DPP). As far as Global Voices can discern, no further developments in this case have been made public.

The July 4 protests seem very much like déjà-vu, as large dispatches of police officers and members of the regiment moved swiftly to remove debris and burning car tyres from the eastbound lane of the Beetham Highway, the main route into and out of the city, and make the path clear for fire trucks and other necessary emergency vehicles. Demonstrators were warned to protest peacefully and stop the disruption or risk facing jail time, but residents have sworn to continue to show their outrage until justice is served:

Pic of the Day pic.twitter.com/ikzHGvuuOt

Meanwhile, citizens used social media to share their experiences. There were many WhatApp voice notes circulating about traffic around the Queen’s Park Savannah and other main thoroughfares, as people avoided the Beetham area, and some schools in east Port of Spain reportedly dismissed classes early:

Standstill traffic around the Savannah

Footage of fires being set — both along the Beetham Highway and on several streets in east Port of Spain — were being widely circulated, and at least one driver shared a video of his car’s cracked windscreen, confirming it had been damaged by the “big stones” protestors were throwing at police officers. The country’s Office of Disaster Preparedness and Management (ODPM) issued a release advising citizens to avoid these areas because of traffic disruptions.

The demonstrations were soon quelled and thoroughfares became passable once more.

In one Instagram video, police are seen warning residents of east Port of Spain to desist from obstructing the roadways during their protests; in response, one man shouts, “Stop the police killing!”

While some social media users tried to politicise the issue and others complained about the inconvenience the protests caused, poet Shivanee Ramlochan said on Twitter:

Port of Spain is burning now.

Which is not to say it’s not burning all the time. Only that we notice & are inconvenienced by it when there are literal flames.

The same people so often made the subject of others’ art: candid photographs, sombre still lives: are allowed rage.

The privileged and racist Trinidadians are at it again. A protest is not supposed to be convenient. You more concerned that you have to sit in traffic than the fact the police are again involved in another extra-judicial murder.
Always bawling Trinis need to protest but you have the worst to say about the only group of Trinis who consistently do so.

The complete details of the incident have yet to be been determined, including whether the killings were “extrajudicial.” In a press conference at 5:00 p.m. local time on July 4, Acting Police Commissioner McDonald Jacob said that the police officers involved in the shooting of the young men have been placed on desk duty as investigations continue, and that video footage of the incident had been sent to the investigators. Citing the many outreach programmes and youth clubs the TTPS maintains in at-risk communities, Jacob stressed that the police service is there to serve rather than oppose the population, and thanked residents for cooperating with officers during the protests.